Proper, right out of the cookbook, Oat Bread; Also, a very round loaf of no-knead rye for us

Gave to neighbors, well, landlord of the neighbors, on the next block

All this month I’m having fun trying to bake with ingredients and methods that you’d find way back in the fifth century. Saint Brigid, who lived in the 400’s, inspired me to begin baking for my neighbors in the first place. Her crazy love for Christ, and endless mercy on those who crossed her path, have been increasingly on my mind these past few years. I’ve needed someone to help uproot me out of my chair and reach out to those around me a bit more.

I’ve been fiddling with recipes from Tastes of Anglo-Saxon England and followed a recipe for Aetena Hlaf or oat bread by the letter. Ooh, it smelled yummy. In the spirit of Saint Brigid, I wanted to give the loaf to someone who might be in need of love, or maybe just bread, so I headed to a house about a block away that has been in constant disrepair. The folks are always losing and/or chasing after their dogs, and the house looks a lot tumble down–and the folks living there, just… seem… stretched, or struggling… I haven’t been neighborly enough to remember their names, but I have fetched their pooches now and again so have smelled the cigarette smoke and seen the upset interior of their living room.

I gave the bread to the landlord, who is gutting the house. Boxes and furniture and stuff is all over the curb. (Hence the photo above.) Pray with me that this family finds a better group of neighbors–neighbors who don’t wait years to finally bring them a loaf of bread.

I’m having fun this month researching more deeply the eating habits of ancient Irish folk. Before we bagged up the loaf of oat bread, we had Viking marauders come and hang out near our warm, honeyed, wheaty, oaty gift. We talked to the Vikings about Saint Brigid, explained who she is and weaved some playmobil plastic into Saint Brigid crosses for them. (Just kidding. That would be REALLY hard…) You could visibly see them swooning to the smell of the hot bread. We play with our food here. 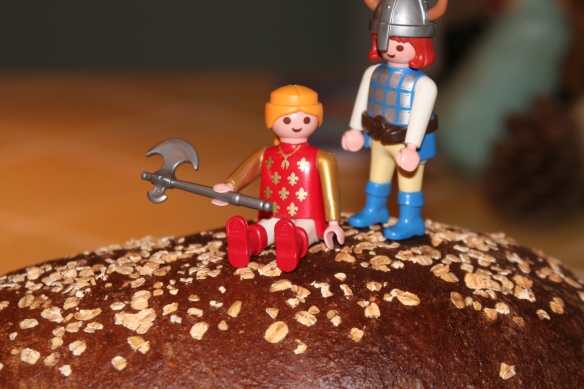 Speaking of play. On Thursday I’m going to a local brewing company to get a tour and then bring home some sludge, some dregs, some barm, no, they call it “yeast trub.” Love that! I’m going to bake with that trub. Here’s what Brian, at the brewing company, told me about the brewer’s yeast I will find at their brewery.

“By dregs, I think you are referring to what we call “yeast trub”… it’s what’s left over in the fermenter after the beer is finished and we have moved it on to the next steps in our process. Yeast trub is a pancake-batter-like “sludge” of living and dead yeast, protein matter than dropped out of the beer, bits of hops and small grain pieces that may have made it over to the fermenter from the brew kettle, and a bit of beer of course.”

I can’t tell you how excited I am to get my hands on some of this sludge. In my reading, I’ve noticed how often brewer’s yeast is referred to in the baking of bread during ancient days… I’m pretty sure they didn’t have tidy little envelopes of instant yeast stacked neatly in their cupboards. Brewer’s yeast was a natural byproduct of making ale, which was a staple in the 400’s. Ale, and mead, and flavored butters, and greens, and stews and so many things sweetened with honey. Those are some of the ingredients that helped fuel Saint Brigid and those around her.

I’m having such fun. Can you tell? Stay tuned…