One loaf of no-knead sourdough for Val

Molded: 7 am next day 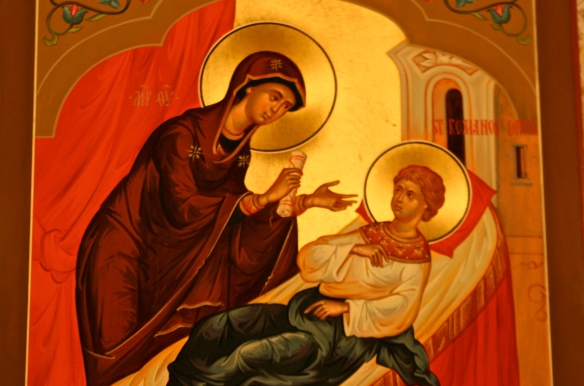 October 1st is the feast day of Saint Romanos, a man who, after being shamed in public, was miraculously granted the gift of composing music. He lived in Constantinople in the fifth century, born only about 40 years after Saint Brigid of Ireland. His story, (and here’s a fairly condense yet dramatic version) highlights the beauties of humility, prayer, and song. Because I admire this saint so much–I’ve actually written a children’s book about him! What fun to dive back into fifth century research and learn about the Byzantine world (how I would LOVE to be transported to ancient Constantinople! Hagia Sophia and the Blachernae church were both wonders…) The story is complete, and I hope to send it out to publishers vite vite!

So… I baked up a yummy loaf of artisan bread for our new choir director at church, Valerie Yova, in honor of Saint Romanos’ feast day. She has brought so much vibrancy and organization to our community, so this is just a small way to say thank you for her efforts. The photo above is from an icon of Saint Romanos that was presented to Valerie before she came to Santa Barbara. It was written by a parish priest in San Diego, her former home…

Valerie is so very knowledgeable in all things regarding church music, and she helped give me some very important leads to Byzantine scholars when I was researching Saint Romanos… She’s just now beginning a course for chanters in Byzantine music. And if you’ve never heard Byzantine music before–head to the Cappella Romana website where they have samplings of many of their recordings. Saint Romanos wrote several of the kontakions that they have sung, and their sound is heavenly…

Lastly, just because it was fun to hop around on Youtube to dig up Byzantine music, here are two Orthodox choirs named after Saint Romanos.