As a writer, my most awesome adversary is fear. Do I really want to know that character’s deepest secrets? Do I want to reveal so much of myself through my words? What if I spend my whole adult life pursuing this career and end up being a dud? Fear. It’s the root of writer’s block. Fear. It’s what makes me stop writing mid-thought and head to the kitchen for potato chips.

Having been a gymnast as a young girl, each day I was challenged to try new tricks. I was asked to become stronger, more flexible, faster and more daring. In general, the entirety of a child’s life is built on learning and having to master new trick after new trick. Dressing themselves. Tying shoes. Learning to swim, and read, and make friends, and share, and brush their teeth until they gleam.

I’m not a child anymore; my life has steadied, and is full of routine. The learning curve has dipped… I’m even forgetting things! We’ve lived in the same house for over ten years. We send the kids off to school with the same peanut butter sandwiches. I struggle with the same vices over and over again–against impatience, against anger, against being sluggish and selfish. And I’m noticing that the older I get, the more fearful I become.

I see this in myself, and it has turned me more toward prayer, but it has also brought about a desire for being child-like again, for being vulnerable and willing to tackle something new. And as I try new things, I know my kids are watching.

Jalapeno bread. The other day I chopped up some spicy peppers and tossed them into the mix. Super spicy. I’ll be making this mix again when cheese is back on the menu!

French corners. I recently pulled out the sewing machine and taught myself how to make a version of French corners. Took three napkins till I’d figured it out, but now I know!

Japanese bags. I recently purchased some fabric and a crafting book from a Japanese company, to help in that country’s recovery . I love the little book, which has patterns for bags and book covers and blankets. Problem is, the headings are in English, but the text is in Japanese! I went for it anyway, admiring all those foreign characters, trying to match the photographs and pattern drawings. 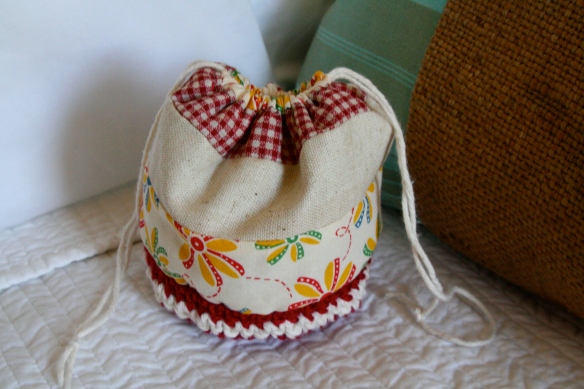 Giving in the spirit of forgiveness. I’m still in the middle of this new experiment and have had only one success. But there are 17 days left until Pascha; time is on my side.

What about you? What sorts of new things have you either talked about learning or are currently trying? Knitting? Planting a garden? Surfing, sailing, skateboarding? Playing the harmonica?

9 thoughts on “Not Afraid of New”