My daughter is performing in a Storybook production of Pinocchio starting today. Ducking in and out of rehearsals these last ten days, I’ve watched the characters take shape, seen a wide array of props tried and exchanged and repaired, and have simply enjoyed being transported to the Appalachians, where this version of Pinocchio is taking place…

So… I thought, on Opening Day, I’ll bake some cornbread for the cast! The little muffins will match the plaid shirts and overalls perfectly…

Leaving the house, we encountered my husband walking back from the coffee shop. We shared a warm muffin with him. 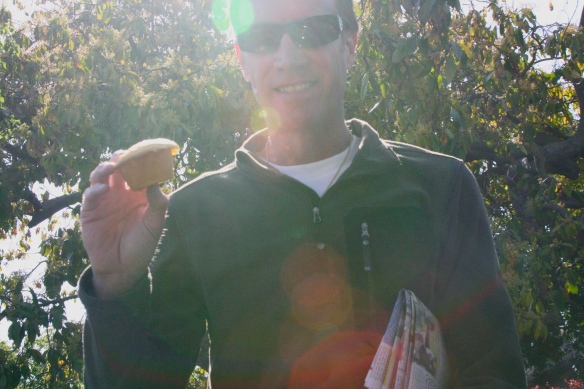 Two blocks later, I spotted a homeless man on the corner. I stopped, having plenty of muffins in my basket, and offered him one, which he promptly tucked into his backpack. He told me his name is Bear, and blessed me.

Next stop. Flowers. Sunflowers for my hard working actress!

And the rest of the tale departs from Storybook Land, and heads straight to comedy central. After the show, which was adorable, I fell down some stairs backstage, twisting my ankle. If you know me, you know I’ve had plenty of twisted ankles over the years… The ankle twisting led to the fall, which led to the head bonking against the wall, which led to shock (the real kind), which led to embarrassment, which led to hobbling out of the theatre with a numb and swollen foot, which led to fainting in the car. Eek! What a way to top off opening day!

No photos of the fall. I was preoccupied.

Seriously. It’s lent and I’m feeling God’s grace. For here I lounge, my foot propped up on pillows, the fountain gurgling outside the open window. I’ve listened to hours of an audio Bible recording and am grateful for time to just be, and think. All storybook productions finish with a happy ending, and despite the black and blue, the scraped knee, and the sore head, I couldn’t have asked for a better way to finish this day of living and giving.