Andrew is 16, going on 17. He’s my first born–the first child we sang to sleep, and taught to swim, and marveled at as his voice changed. We love him so terribly much it’s crazy.

He’s a studious sort of fellow. I’ll find him late at night peering through some history book, and when I ask him if he’s getting his homework done he’ll say, “Oh, already did that. I was just curious about…”

Anyway, it’d take forever to really introduce you to that boy. Like any child, like any young man, he’s filled with dreams, and hopes, and talents, and stories. Especially stories. He wants to be a writer.

And he and his sister (the sister from Episode One) are exactly opposite in so many ways, except for this. When I asked Andrew what he wanted to bake with me–to then give away–he shouted, (quite loudly) CINNAMON ROLLS! Wow, my cinnamon rolls must be good. So, we decided which night to begin the process and you know what happened? Too much homework.

He, however, didn’t want to settle for scones, and I, again, wasn’t about to bail him out and mix sweet dough on my own. So we waited.

The next night, right after dinner, we cleaned the dishes together and got to work. Music goes hand in hand with manual labor in our home, so I told him to choose a playlist. He blasted some of his moody music, hefted ingredients out of the cupboard, and I started measuring. He cracked the eggs, and almost put in three tablespoons of yeast–but I yelled loudly over the music and we got that fixed. I heated the milk, he measured out the salt., etc… Good times.

The dough was rising and we made our plan.

Give to first period classmates and teacher, all who have to endure pre-calculus early in the morning!

Mix them Wednesday night, bake them Thursday morning. Give them fresh out of the oven–maybe even share with the carpool kids since they’ll have to sit and smell them all the way to school…

School’s almost out and he won’t see these folks for months. Plus, in order to survive pre-calculus, you have to form a certain cinnamon-roll-kind-of-bond…

sing, put in the fridge.

Sleep. Wake up. Turn on the music, sing, heat the oven, sing, bake.

And out the door he went, a whole pan of cinnamon rolls in his possession, still singing on the way out. 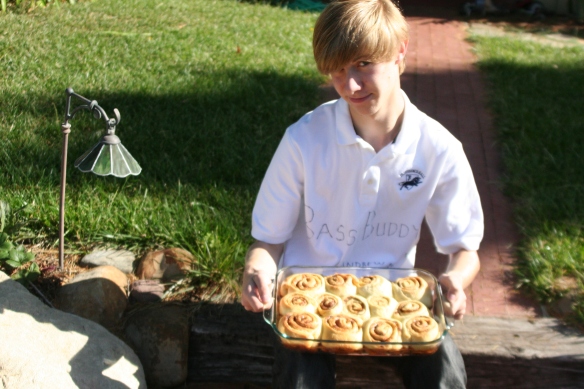 And did he come home with the pan? Nope.

But, he did say that the cinnamon rolls were well received. That he enjoyed baking with me so much, that he’d even do it again!

So, that’s a miracle,

Only two more family members to go (since the fish doesn’t count). 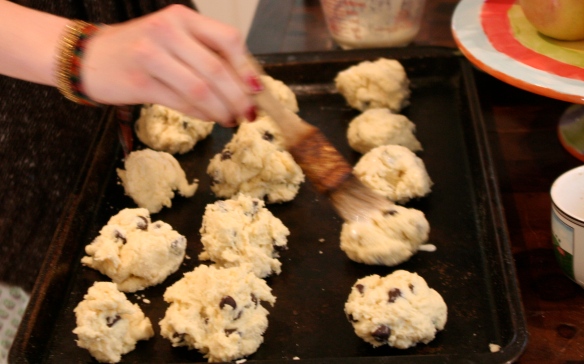 Typically I don’t involve my kids or husband too much in my baking or giving. Sure, I’ll mix a batch of chocolate chip cookies with the little one, or cry out for extra help when my hands are full of flour and the phone rings, but for this next round of giving I thought I’d get the whole gang fully involved. I am asking each person in this sweet family what bread they love. Then, we’ll bake it together, and they get to choose who to give it to–plus they do the giving. It’s the end of the school year, with summer just days away, and this change brings a little fun and laughter into an intense finishing-up time.

My daughter’s enthusiastic about most good things in life. She loves sweets, so when I asked what she’d like to bake, she didn’t say rosemary rolls. She said, “CINNAMON ROLLS.” She shouted soooo loudly I had to cover my ears. That happens with her.

We made a plan.

Give to Providence Hall teachers–the school where she now sings with the choir, and where she’ll be a freshman next year

Mix them Wednesday night, bake them Thursday morning. Give them fresh out of the oven at the staff meeting, 8am sharp

Cause she loves that school and all the teachers, and can’t wait to be there full time!

Bake first, drive second, run up the stairs third, figure out which room fourth, smile and hand over the goodies fifth

Problem was, being the extrovert that she is, she over-scheduled herself and the nighttime mix of the cinnamon rolls didn’t happen. I wasn’t about to bail her out and do it myself, so I didn’t.

Since I do like to schedule, I had already informed the recipients that the cinnamon rolls would be at the meeting. So, we had a problem. People hoping for cinnamon rolls, and no CINNAMON ROLLS!

A problem easily solved by her second favorite morning sweet,

We mixed up one batch of scones together at 7am, and she almost started to cry when she realized we were giving the whole batch away. (It was early…) She said, The whole point was so I could have CINNAMON ROLLS, and ….then…give some away!

She brightened up when I told her we were making another batch for the family when we returned.

We raced over to the school, and she sprinted inside and found the right room (Mr. Elwood’s). She said she felt EVERY adult eye on her when she walked in. And since she’s a stage-happy sort of girl, that’s something.

Then, we raced back home and made that second batch. They were good.

So, that’s it. Episode One.

The alarm rings and I slip out of bed. It’s still night, still dark. Still in the fives.

First I light a candle, then whisper prayers. Soon, I’m in the kitchen, the quiet kitchen–all the house still asleep. Those faces like angels, relaxed, dreaming, cuddled next to favorite pillows and stuffed creatures. They’re easy to stare at, those sleepy, beautiful little ones.

Flour is in the air. The mixer is running and suddenly the morning light slips through one window, then another. Bright light fills corners and highlights the white cabinet, the pale yellow wall, the shutter, the palm. 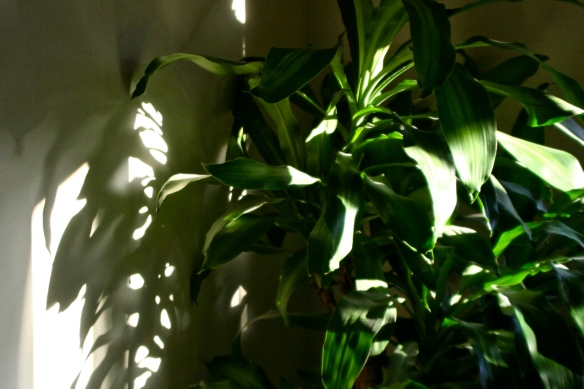 I step away from the kitchen, open the front door and listen to the mockingbird who is shouting every tune he has ever learned in succession. The neighborhood is filled with his wild melody and I smile, thankful for the way he greets the day.

Me, and a mockingbird.

In the afterglow of Pascha, this family has been enjoying each day and all the fun that comes with being able to finally shout out Christ is Risen! Plus, there are Easter goodies to nibble on, 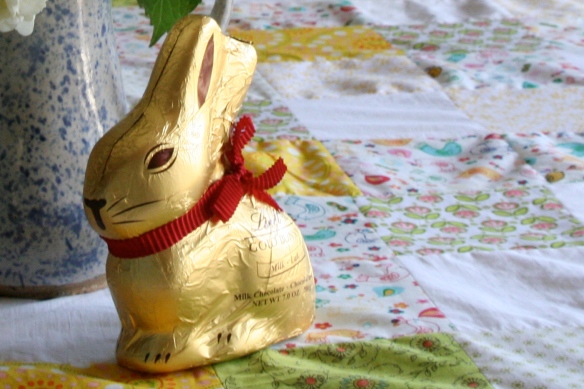 new books floating from table to desk, and flowers all around that shout spring is here!

And spring has sprung. It has been more like summer here on many days, urging me to the beach for a sit in the sand while the little one throws rocks or generally spins in wild circles. My ankle is still a bit tender, so I’ve confined my fun there to collecting rocks… 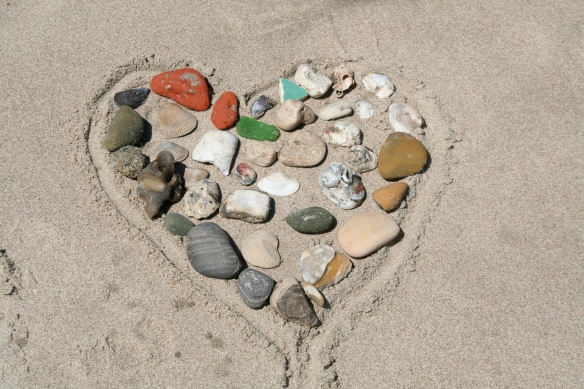 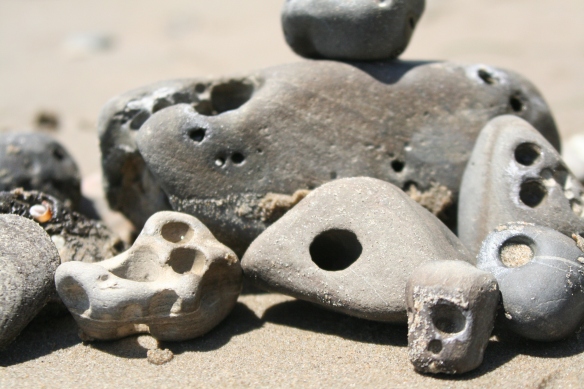 And I’ve been baking. Making scones, for tea parties, and trying old recipes again. Sometimes old recipes don’t come out as well as they did before, so instead of being sad, you get silly…

And sometimes you have a friend who gets sick. Really sick. So sick you don’t see her at church for weeks, so you call and ask if there’s anything you can do, and then you make her rosemary rolls. 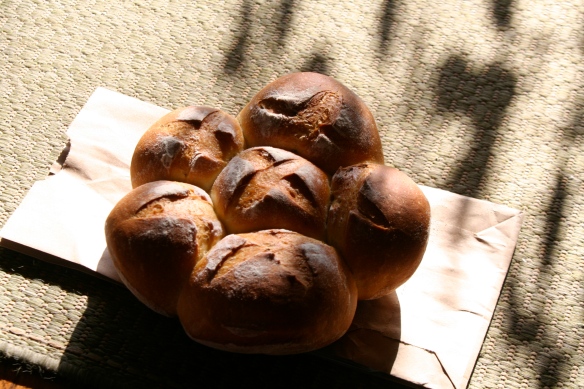 And then, it’s your birthday! Plus Mother’s Day heaped right on top, so someone else bakes you a cake. And they put a sheep on the cake–just because. Just because you’re part Basque, and you have little sheep here and there around the house, and because this particular sheep just happened to be hanging out near the cake when the photo was taken. 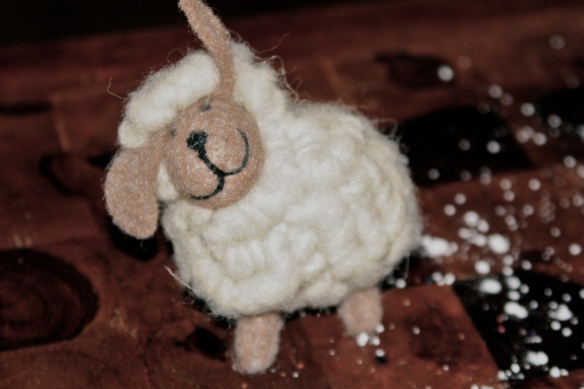 Oh, that yummy cake. A mix from Williams-Sonoma that is so packed with butter that you can only eat slivers at a time. But somehow, two days later, there’s not much left.

And speaking of not much left… The school year is coming to a close, with summer days already tempting me toward a looser schedule and lots of writing time. For this summer will take me back to pen and paper, and hopefully story after story. Stories have been piling up in this red-headed head of mine, just bursting to get out.

Meanwhile, I’ve got bread on the rise, and kids to wrangle, and slivers of chocolate cake still to nibble on.

What about you? What have these Bright Days been like for you? And what sorts of summer plans are in the days ahead in your life?

And do you have little sheep popping up in your pictures, too?

This year during Lent I looked through many baking recipes to try and find the best bread way to celebrate Pascha. I thought about making the popular Greek tsoureki, which has milk, butter and eggs, plus decorative red dyed eggs on the top–and also considered trying the Lebanese ma’amoul, since I love using orange blossom water in my baking…

But when I told my family my thoughts, they revolted! And I don’t blame them. When you’ve deprived yourself of butter for 49 days, the idea of SCONES pops right to the top of the Meyer Baking List.

I’ve been making the same scone recipe these last twenty years. We rarely have cream in our fridge, so I have substituted the cream for just about every other dairy product imaginable (cottage cheese, cream cheese mixed with milk, sour cream, plain milk…)  and still the results have turned out beautifully. My most common swap for cream is plain yogurt. The yogurt is healthier, and the scones are still so delicious. Here’s the recipe from my tattered, out-of-print Crabtree and Evelyn: A Book of Light Meals cookbook, which automatically turns to page 141. On the eve of Pascha, I splurged and used REAL cream for the scones that we ate and shared with our friends at church.

Step One: Preheat oven to 425 degrees. Stir together flour, baking powder, 1 tablespoon of the sugar, and the salt into a large mixing bowl. Add the cut butter and work into flour mixture with finger tips until mixture resembles coarse crumbs. Add currants, or chocolate chips, and toss.

Step Two: Make a well in the flour mixture and add eggs and 1/2 cup of the cream or yogurt. Mix with a wooden spoon until dough clumps together.

Step Three for Traditional Scones: Knead mixture in bowl for 30 seconds–do not overwork the dough. Turn dough onto lightly floured surface and halve. Form each half into a ball and flatten to form a circle about 3/4 inch thick and 5 inches in diameter. Cut each circle into 8 pie-shaped wedges.

Step Three for Drop Scones: After mixing ingredients together, use a large spoon and simply scoop up spoonfuls of dough and drop them onto the cookie sheet like you would for “drop biscuits.” If my dough is wet (which it usually is when I substitute the cream for yogurt), then I use this method. If my dough is dry, then I use the above method of kneading and cutting into wedges. Both methods make for attractive and delicious scones. 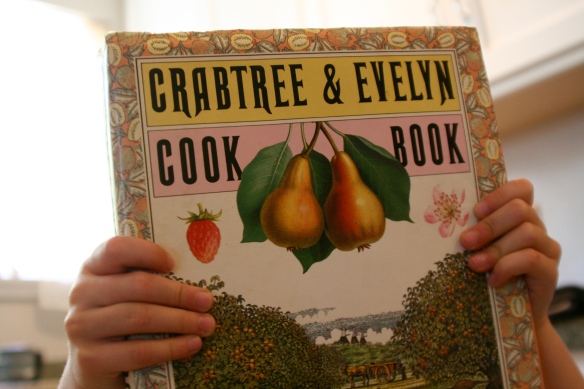 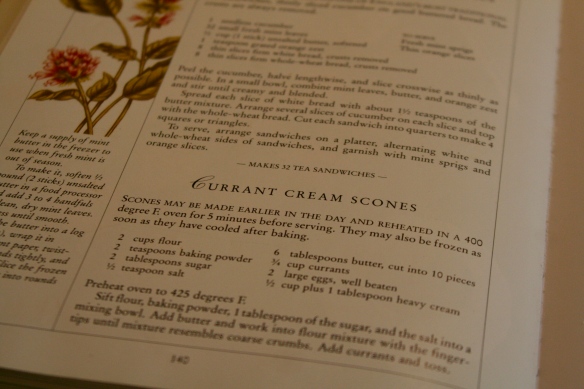 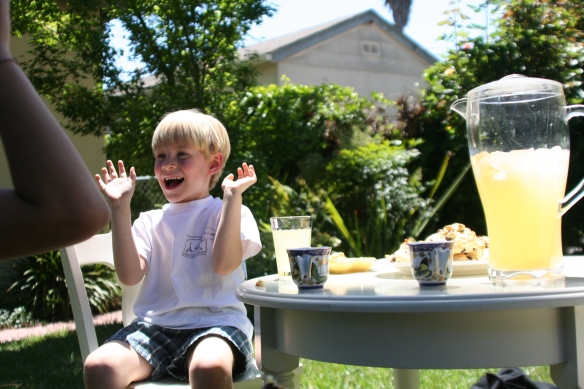 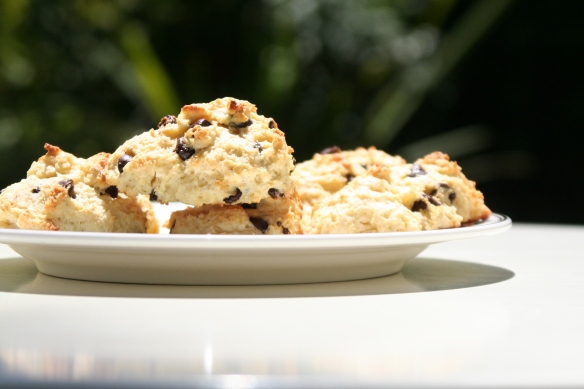