So, it’s Palm Sunday and we had a giant potluck after church. My contribution to the potluck, since I’m barely good for sharing anything except bread (I really am an awful cook), was one gigantic no-knead loaf of bread that I mixed olive tapenade into. So, yummy. I also baked a smaller loaf of bread for a friend and brought them both to church.

I was so wrapped up in the Palm Sunday service and all its glory (and distracted by an extra squiggly second son), that I completely forgot to head out after communion and slice up that gigantic loaf of olive bread. Simply. Forgot. I rushed out right after announcements–after Father mentioned the upcoming potluck. Almost ran over a few folks standing in the back. And there were both of the loaves, cut, in the basket, and ready for the table. I sort of grimaced. Not because somebody had done my job, but because I really wanted to share that second loaf with a friend.

The grimace registered and my friends, the awesome bread cutters, grimaced, too. They felt bad–though it was all completely my fault. Fresh bread, left in the kitchen of a church that’s having a potluck, is more than fair game, right?!

So, we thought fast, placed some of the cut bread into a bag for my friend, left it on the counter, and joined the folks around the coffee hour table.

And here’s the mystery. When I brought my friend into the kitchen a half hour later to offer him the bread, the bag was there, but the cut bread was all gone.

Oh, well. It’s Holy Week and someone was hungry! Feed the hungry, clothe the naked. I pray it was enjoyed. 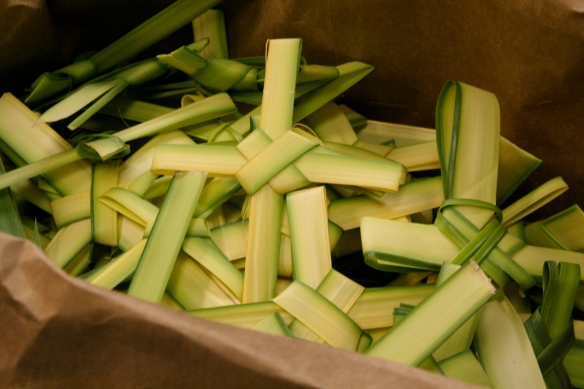 And, here’s the beauty of it all. I get to try again! There’s plenty of flour in my cabinet, plenty of muscle in my arms, and another opportunity available to give.

Sending you all love.