My last post explained a bit of how my parents have moved to a new home and are getting settled here in Santa Barbara. My dad’s ultimate goal is a garden and chickens (coming soon!), but along the way he’s had many other interesting thoughts and hopes–and some have come to fruition, and others, like the outdoor oven I was telepathically rooting for, have not.

But, he did purchase a Big Green Egg.

If you haven’t encountered one of these round, fuel efficient, space-age-looking barbecues, then, well, maybe you will? 🙂 I have a brother-in-law who loves his–and makes pizza, and cooks turkeys, and bakes lasagnas and all sorts of other kooky things… But cooking on this type of barbecue is all new for me and my dad.

We were curious how a loaf of bread would bake in the egg. Would it act like my cast iron pots, would it bake like a wood-fired pizza oven, would it mimic an earthen oven? So we put it to the test one gorgeous, Santa Barbara afternoon. 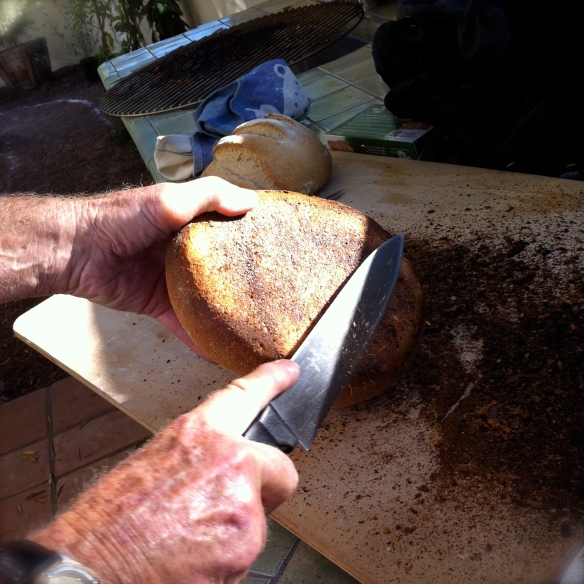 And the verdict is?

Because we burned the bottom of the bread, we decided not to grace the neighbors with the second loaf. We WILL try again and certainly do some sharing.

What about you? Have you had success baking in an outdoor setting? I’d love to hear your stories of adventurous baking.

8 thoughts on “Baking on the Big Green Egg”