When I started baking several years ago, a few of my sister-in-laws were curious. Over these many years of family trips back and forth between here and there (eight hours by car–Santa Barbara to Scottsdale) we have talked more than a bit about bread, we have baked together, and broken many a loaf together as families do…

Fast forward a couple of years and now these girls bake for their families, their friends, and even bake for me! During our family’s last trip to Arizona, without any prompting from my corner, I spied one sister-in-law baking three times over seven days! I didn’t say much–not wanting to scare her out of the habit, but, WoW!

I’m so thrilled that this habit caught on and that she’s finding meaning in doing something the Slow way, and offering her family

food made with two hands

and lots and lots of love.

Bread and flour EVERYWHERE here in the Arizona Meyer homes

Doesn’t this loaf of bread I baked look like I was trying to fuse the Rockies with the Appalachians? This first launch was sped over to Ken and Judy, an aunt and uncle who recently moved (from somewhere nearish to the Appalachians) into a new home here in the Arid Zone (which happens to be kinda close to the Rockies! No accidents in bread baking, I always say :)).

My four year-old was playing hide and seek and got accidentally jetted into a jumping cholla. If you know the desert around here, you know this was not the greatest way to sign out the year. We’re hopeful that 2010 will be jumping-cholla free! Here he is contemplating the cactus the day after the event. 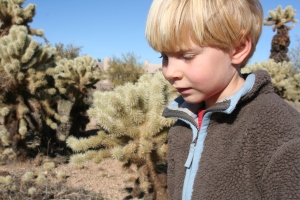 There are many bread traditions that usher out the Old and in the New. In Greece they have vasilopita–a lemon-flavored yeast bread with a hidden coin, baked in honor of Saint Basil. In Scotland, there’s an assortment of bread items that might be baked: oatcakes, scones, shortbread and three-cornered biscuits. In Poland, there’s a tradition of godparents making bread in various shapes, such as rings, crosses, rabbits and other animals. But my favorite New Year bread tradition comes from Ireland, where they take leftover Christmas bread or cake outside and bang it against the door and walls of the house while saying a prayer for a hunger-free year. While it took a bit of coaxing to get my oldest sister-in-law and her family out of the house for this interesting custom, once the first piece of bread was launched, it livened up the party considerably!

(And we had the perfect loaf for launching… I over-proofed two loaves and we couldn’t get them off the tray. We scooped them with spatulas onto the baking stone and the two jacos merged, ending up looking like a giant mushroom. The mishaped, tossed and dirtied bread evidently didn’t keep it from being edible…) 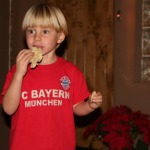 Three new bakers. Better to teach a woman to bake than give her a loaf of ciabatta. This has been bread lesson week 🙂 Two sister-in-laws and my daughter have been fiddling with flour. All their efforts have been AMAZING!

Okay–had to end this with a blast. We launched a rocket! 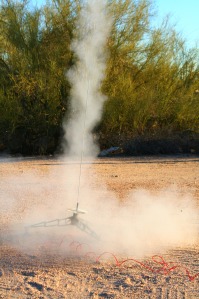 What about you? What sorts traditions launched you into this new year?

Gave to: our hosts here in Scottsdale

We’ve traveled to the Arid Zone to visit with family over the holidays. My husband’s enormous clan is out here and we always try to make our way out to Scottsdale, (and Chandler, and Tempe, and Phoenix–they live everywhere!) sometime during the winter. If you’ve ever heard my fainting-in-the-heat stories, you might understand why we prefer the cooler weather…

Always received with warmth, this year there is added enthusiasm as I’m trying to bake and give away bread, even here. Plus, several of my sister-in-laws are hoping for baking lessons. Already we’ve made one no-knead/pain a la Suzanne recipe, which despite the fact that we had the most basic of flours, came out beautifully. I just don’t think you can mess that recipe up.

Anyway, I think we’re getting the better end of the stick. We’re contributing our cheer, and a little bread: 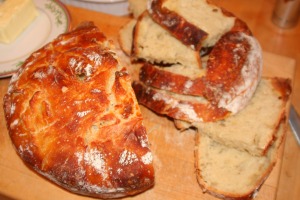 And they’ve already given us a sunset 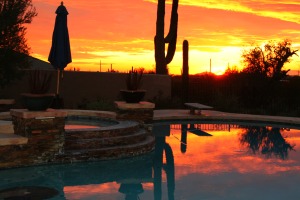 …and a blue moon.