When my husband and I moved to Santa Barbara in 2000 to be close to relatives in Southern California we never expected to contend with annual fire danger. Earthquakes? Yes! I was raised in earthquake-ville and know the drills; we’ve got the emergency kit for when and if that day ever hits–but fires?

Kaflooey. We’ve been living through one threat after another these last several years. Right before I began this blog, in May 2009, we had the Jesusita Fire, which just about ignited our entire neighborhood. Many of our friends have lost their homes these last several years in the Tea Fire, the Zaca and Gap fires, and the Painted Cave Fire…

Last Tuesday, driving home along the foothills, I saw the familiar plume of smoke. This is after a similar blaze just the week before, which endangered another part of our foothills.  The closer I got, the more I knew that this was burning right above my son’s school in Montecito. Emails started pouring in from the emergency agencies, from the school, and helicopters began buzzing overhead, sirens sounded–forces were on the move.

Firefighters! I have come to love and respect these men and women and the work they do for us. Wouldn’t you?!!!

So… the fire bell rang, the men rushed to the foothills at noon and hiked three hours to get to the blaze. They fought that fire all afternoon, all evening, eventually hiking out in the dark, headlamps ablaze. They slept well that night, I think.

And that same night I mixed up some dough for a giant loaf of sourdough. It was an emotional and tiring day with the thought of more property at risk… But the making of the bread kept me busy and by lunch time I had a gorgeous loaf of sourdough ready for giving.

All this to say!

We made a visit to a fire station. Usually, I don’t take photos of folks I give bread to. But Greg, the firefighter on the right, was absolutely beaming with goodwill and gratitude, and stood there holding the bread for so long, and with such joy that I finally pulled out my phone and snapped a shot. He had just returned from many hours in the field and said he was heading straight to the dining hall to break open that bread. 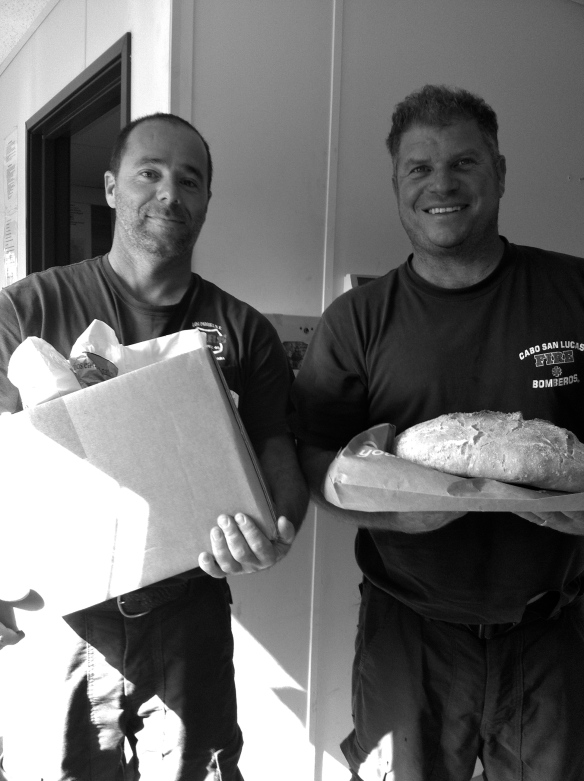 And in my giving I had help. Can’t forget the better two parts of my sharing team… 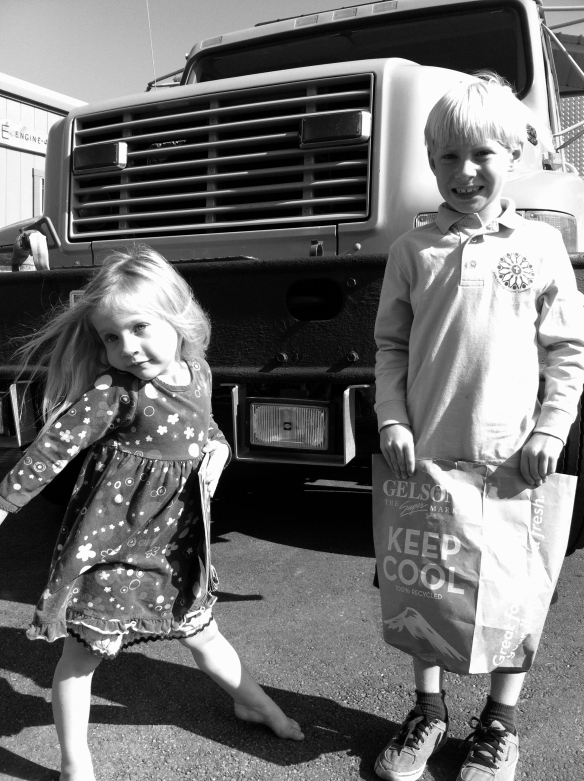 With the ravages of Sandy still lingering, and two fires in two weeks battled here in my own hometown, I’d like to say thank you to all who are stepping forward to lend a hand, to write a check, to comfort someone in their loss. These efforts are Love.

Sending you all lots of that love, and good cheer!

Driving home from the morning run to school I recognized the familiar plume of smoke that shouts Fire. Here in Santa Barbara we’ve become all too familiar with the symptoms and realities of forest fires.

I returned home, had breakfast, opened up my computer and there was the emergency email from the County, providing a bevy of details. Emails came about every half hour and were full of specifics–how many engines were headed up the mountain, how many helicopters and air tankers, how many men on the ground. They were going to throw all their resources at this blaze to catch it now–on maybe the hottest and most dangerous day in October. I said a quick prayer for friends who live in that exact place.

But here at my home, with the fire several miles away and the winds calm, I went about my day.

And that meant bread baking. I knew things were off in my head when I discovered I was almost out of flour but decided to bake anyway! The rest of the white flour went into the mix, then some garbanzo bean flour, a little honey and milk, some yeast, grind up some kamut, and, OH!!!, why not grind some oats while you’re at it! Was I crazy?

Back to email. Back to fire updates and fiddling with stories, and sweeping up pine needles.

Before I knew it the dough had risen risen risen, risen way too long and the shaped rolls were looking desperate and wrinkled and forgotten. Into the oven anyway!

And again, lost in some other time zone I forgot the oven was hot, and that the rolls were done. Over baked; it was just one of those days.

To save it all, despite the bizarre concoction of grains and what not, John Ronan came home from school wanting toast with fig jam. Of course! I said. And rhubarb jam, he said. Of course! I said again. I was thrilled–the child doesn’t even like figs or rhubarb.

And believe it or not, the whole dinner gang loved the bread, wrinkles and all. Distractions don’t always make something turn out lovely, but I suppose it doesn’t mean they can’t at least be tasty!

So, here’s to all of you who get distracted from time to time like I do. Part of life, part of being human. But forgive me for not sharing the bread. I just couldn’t. Look at it–would you have shared? 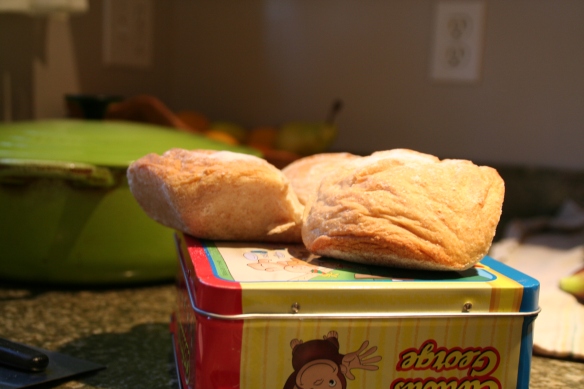 And the fire is close to containment. Thank you for your prayers! No excuses of that sort today. Time to get back to baking (with not quite so many ingredients…).

Can NOT remember who I shared these rolls with (it was two whole days ago). Now I know I’m getting old! 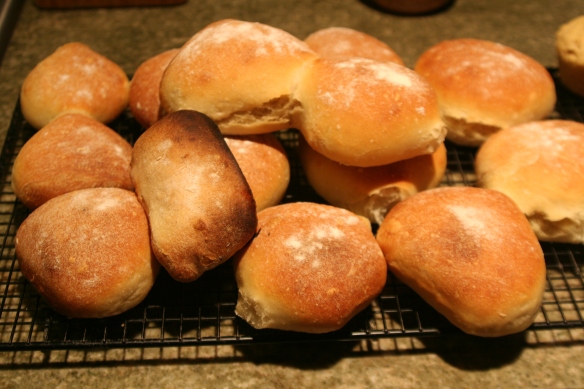 It’s cold. My husband loves to see how long we can go before we turn the heater on. In coastal Southern California you can get away with never having air conditioning, and you can make it far into fall without adding extra heat to your home. Yet every year my husband seems to want to stretch our No-Heating a wee bit further along the calendar, as if we’re in some sort of wilderness contest. This year, he’s hoping to wait until AFTER Thanksgiving…

Because my preferred temperature range is somewhere between 70 and 80 degrees, I took matters into my own hands the other chilly day and collected firewood from a nearby wood. I hefted several large chunks of broken oak into the trunk, carted it home, cleaned out the fireplace, donned my wool cape, and settled into a chair to do some handiwork in front of the fire. Bread was on the rise.

While I was staring at the flames I thought, how fun to pop some dough into the ashes and see what happens! I’m strange that way. Not always terribly grown up… Playing with fire and dough seemed just the right thing to do!

So, I found a little metal tin, filled it with one of the rolls that was rising, 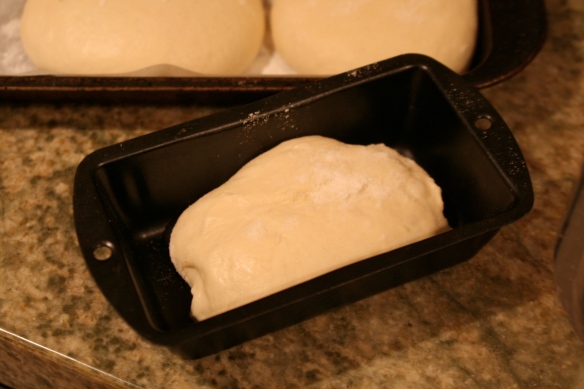 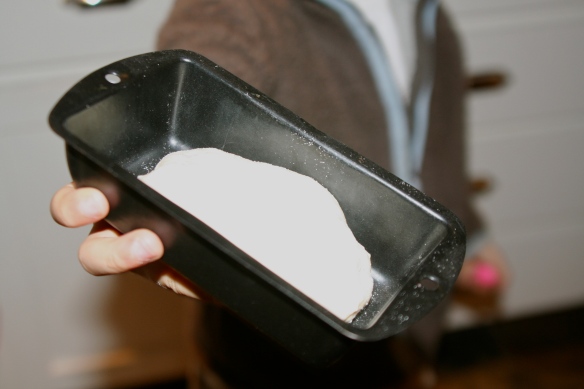 and into the fire it went. 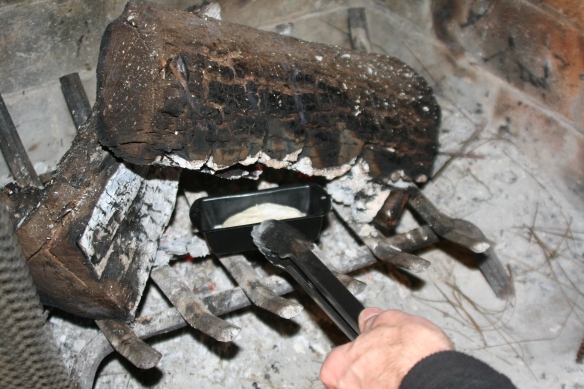 There was this perfect little tunnel in between the logs.

I covered the tin with foil to keep out the ash 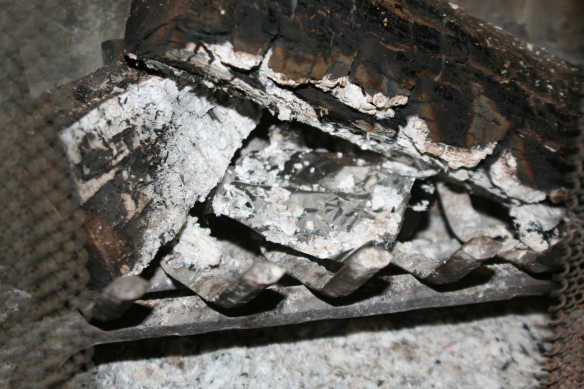 and 25 minutes later the little roll was partially burnt, but all the way baked. 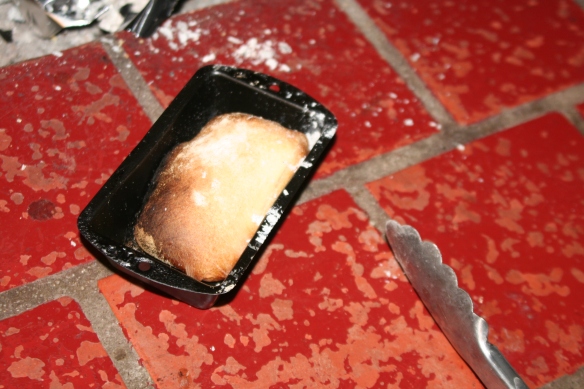 I love trying to do things like maybe they did ages ago. Last January I spent the whole month trying to bake with ingredients and techniques that they might have used in the fifth century–during Saint Brigid’s time. What about you, have you ever tried cooking or baking out of your fireplace. I’d love to hear your stories–they might inspire me to more fire fun… 🙂

Oh, and guess what. My husband’s ears must have been burning. Or maybe he thought 58 degrees in the house was a bit on the chilly side. The heat is on, and I am so TOASTY HAPPY!!!

One batch of rosemary rolls

Gave to Jim and Jennifer 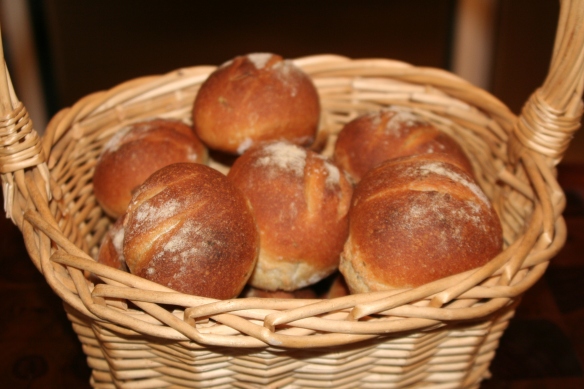 As I rearranged the rosemary rolls on the hot surface of the baking stone, I pulled my bare hand out of the heat and suddenly remembered that one year ago we were worried about a much bigger flame than the one that bakes bread in my oven… Right above our home near the foothills, a fire had started. It was a hot May day and it was the sound of one fire truck after the other that finally caused my husband and I to peek out our back door.

And there were the flames.

The first days were spent packing and wondering where the wind would push the fire next. When the wind shifted, we evacuated, and waited some more. 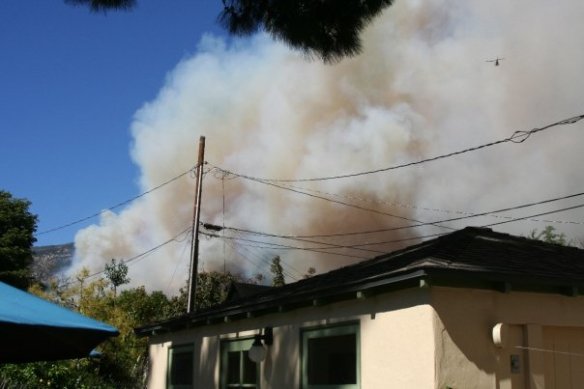 The winds blew stronger and we evacuated again. Turn of events–I ended up in the ER, a large ember having flown into my eye. Finally we fled to LA. I passed a birthday away from home, with an eye patch!

What a wild ride. When we returned home, grateful and happily ready to clean the layers of ash from the furniture and patio and plants, we also felt an immense heaviness for those who had lost their homes. There were many.

And all this, after the Tea Fire. And the Gap Fire, and the Zaca Fire before that…

So, on this May day, the first anniversary of last year’s Jesusita Fire, I was in my usual mode of mixing and molding, and baked a batch of rosemary rolls. I wanted to share them with our neighbors, Jim and Jennifer, who moved in more than a year ago. And as I walked to their home, their new home, I realized how it was all fitting together in my mind. Their new house, with the shaded porch and the gorgeous red alstromerias blooming in the front yard, is the replacement for their home that had burned in the Tea Fire 18 months ago…

Here’s to Jim and Jennifer, and to their new home, and to the right kind of fire, the kind that bakes a nice batch of rosemary rolls…