I baked an extra loaf and was wondering if you’d like it.

Oh, that’s so sweet! But I’m eating low carb right now and I really shouldn’t. I’d eat it all in one gulp!

I baked an extra loaf today, and would love for you to have it.

Thanks so much, Jane, but we’re eating gluten free at the moment.

Many years ago, I stayed away myself from anything wheat related. For more than a year I skipped pasta and bread and bagels and donuts. I was battling an onset of allergies and was ready to do all I could to rid myself of the uncomfortable world of tissue boxes and sneezes. It turns out I didn’t have a wheat allergy, but when you’re miserable, you will try just about anything.

And, the whole wheat industry has changed. The baking industry has changed, people’s eating habits have changed. So I’m not surprised when someone turns down a warm loaf of my homemade bread. It’s just that it’s happening so often now that I’m wondering whether I should find another way to give?

Anyway, that’s what I’m currently pondering. And you can ponder right alongside me if you like. I’d love your thoughts if you’re in the mood to share… 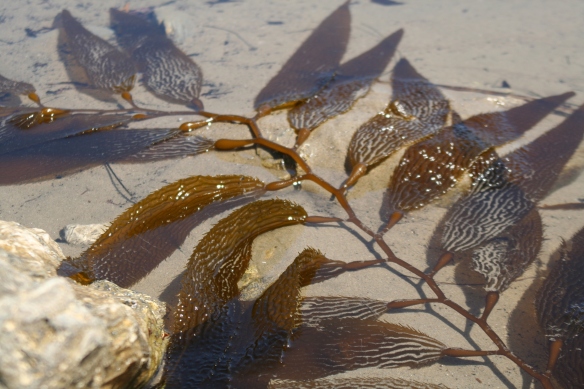 I love granola. But purchasing it in bulk at the  health food store is costly… At a recent farmers market at our church, a friend made a batch of granola–exactly the kind I like–so I begged her for the recipe and have been making it now for months… Thanks, Jennifer!

Yum. So easy, and much more forgiving on the wallet.

And, this recipe is glooten free. Okay, gluten free, (who came up with the word gluten, anyway?) as long as you buy gluten-free oats.

This recipe can easily be halved or adjusted… Adjust amounts of seeds, add raisins or dried cranberries, or other nuts, perhaps pumpkin seeds or goji berries–all according to your liking. I keep my batches of granola in a big jar in my pantry. It keeps well for a long time, but I go through a batch of 7 cups of oats every two or three weeks.

Step One: Preheat oven to 325 degrees

Step Two: In a large mixing bowl, combine oats, nuts, seeds, cinnamon and salt. Stir round and round.

Step Four: Pour the wet ingredients over the dry, and mix.

Step Five: Divide the mixture in half, spreading it out onto two cookie sheets. Bake for 30 minutes at 325, then take out the granola, turning it with a spatula, and bake another 15 or 20 minutes, until toasted and golden brown.

Step Six: Yum! Store in an airtight container. Even this granola can be shared. You can put cooled granola into clean mason jars and give as gifts, or invite a friend over for breakfast and eat with milk and fresh berries, or plain yogurt like I do 🙂

(Also made some faina…)

Gave to Steven and Elaine, nice neighbors who just moved in next door 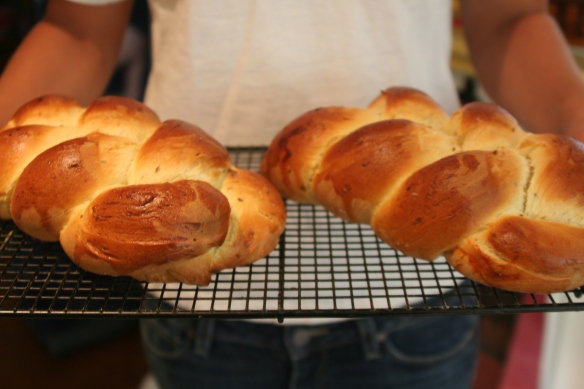 My husband and I are big soccer fans. Almost geeky in our love for the sport. He played as a child, and we both played for many years as adults. There’s something really addicting about chasing after that black and white ball–and scoring goals. I really loved to score goals 🙂

So, each year when the World Cup comes around we break all our normal television rules, call the cable company for service, and rise at whatever time needed to watch the matches. Yes, geeky in our love…

Anyway, I’m a big South American fan and come the semi-finals I was rooting on Uruguay with fervor. I got so excited about their chances that I decided to look up some Uruguayan bread and bake away. I got even more excited when I found a recipe for a gluten-free flatbread called faina or farinata. It’s a mixture of garbanzo bean flour, parmesan cheese, salt, black pepper and olive oil. It sounded wonderful and I was ready to pass on this great new find to all my gluten-intolerant pals. But… the faina is pretty near horrible stuff. I made it two nights ago and everyone in the family gave it a willing whirl. The comments that passed around the table went like this: “disgusting,” “awful,” “how could you?!”

I began to despair for Uruguay. If this is what the team is fed on then no wonder they lost to the Netherlands.

Here it is–I made a tower out of the pieces that I cut into cracker-like shapes. I’m not sure what else to do with it–except play. The kids said it might make a good Lord of the Rings lembas if we were in an epic tale of despair versus hope, (and that we would win by feeding it to the bad guys) but….

Ahhh, but I gave the Uruguayans a second chance with the Sweet Anise Bread recipe that I found. I fiddled and adjusted a few things, and wow, what a delicious bread! I was happy to share with our brand new neighbors on the corner, which led to an afternoon of getting to know them–a blessing we haven’t had from tenants in that house in a long time.

So, Germany and Uruguay play in just a few hours. Depending on the outcome, I think I’ll know which bread they ate for breakfast before the match.

Gave to a family with wheat allergies 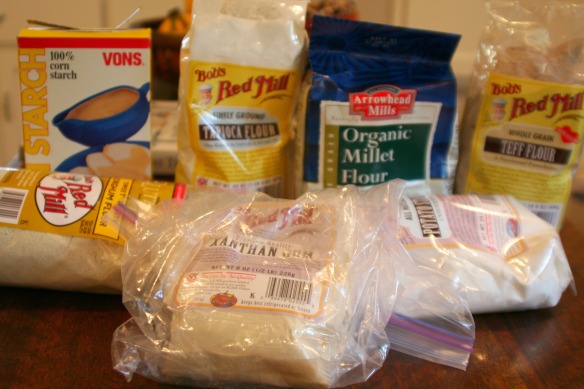 There’s a family I know with a new baby. If you’ve ever been a mom, you know what it’s like those first few months of tending a newborn. There are so many beautiful moments of feeding and marveling at the soft skin and the little toes. Of watching the baby sleep, his tiny chest rising and falling rhythmically. But tending these little people is fatiguing, then add a newborn who needs surgery, who has struggles that other babies might not have, and you have one sleepless, survival-mode mommy…

I asked if I could bake for them. And that’s how I’ve been introduced to the world of gluten-free baking. And what a world it is? It’s like speaking a foreign language.

Can you believe I fit all of those ingredients into one loaf of bread? With so many distinct grains and starches swimming around in there, it’s no wonder it’s generically (and badly) named Gluten-Free, Vegan Bread.

First of all, I want to know who Mark Engelberg is, the creator of this recipe. The recipe I used is here, and has been copied all over the web. But where is Mark? I tried to find the man, but couldn’t. What I’d like to know is: How did he ever think to put such an odd mixture of ingredients together all in one bowl? Why did he think that sorghum and teff and millet would all get along? And where’s the rice flour? The spelt? The quinoa? It stuns me.

Anyway, this recipe was easy to mix and bake–a bit horrible to look at, but the phone call this morning proved what a powerful thing bread products are. “So good!” my friend said. “So… good!” They’ve been living bread-less for some time caused by major gluten allergies, and buying wheat-free products doesn’t fit well within their budget. It took a bit of a dent out of mine… 🙂

But what fun to make something that will help feed them for at least a few days. I handed over both loaves without trying the bread myself, and will bake another two tomorrow so that they can store some away in the freezer. And maybe I’ll try some of the teff peanut butter cookies just for the fun of it. Or the millet crackers… Anyway, here are some photos to give you an idea of the strangeness of this concoction. 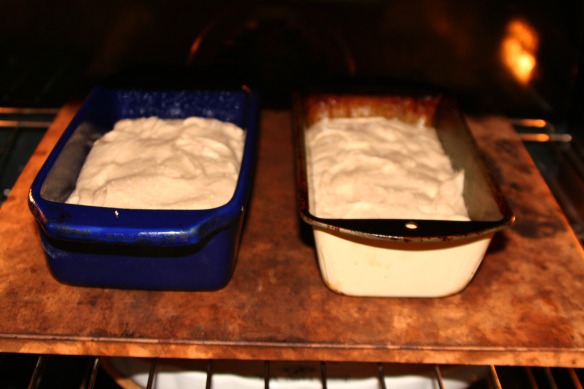 Gluten-free batter before the rise

Gluten-free batter after an hour rise

So, please share this post with folks who are struggling to find a good, no dairy, wheatless bread. Apparently it’s yummy. And if any of you happen to know Mark Engelberg, please tell him I’m looking for him. His story of kitchen creativity is one I’d like to hear…

And I have some ideas for a new bread name.

For those of you with more time on your hands…