Every year when I order stalks of wheat to weave for Saint Brigid’s feast day on February first I end up with many leftover heads of wheat. I snap the heads off the stalks then put them into a bowl and leave them on my counter because they’re so unusual and lovely.

This year during Lent I wanted to grow another indoor plot of wheatgrass for all of us to watch turn from seed to new life. It shows in such lovely form the sacrifice that Christ made on our behalf. Have you read this parable lately?

Truly, truly, I say to you, unless a grain of wheat falls into the earth and dies, it remains alone; but if it dies, it bears much fruit. John 12:24

So we took those old heads of wheat that I’ve been saving (in years past I’ve simply bought wheat kernels in bulk at the health food store) and started to dismantle them one seed at a time. 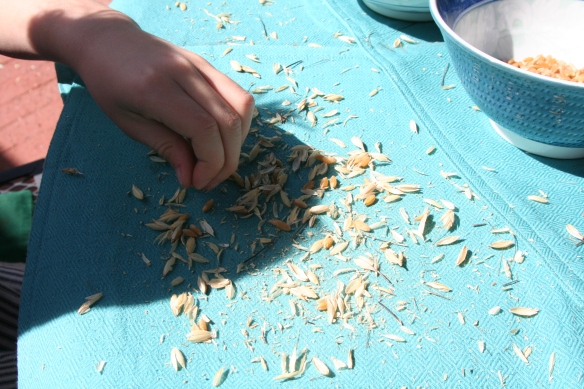 Each stalk holds between 30-50 kernels of wheat. We counted. 🙂

The chaff and the seeds. I don’t know why, but it makes me think of the sheep and the goats.

We prepared a bowl of soil that we could keep indoors and sprinkled our seeds fairly thickly on top of the dirt. We covered the seeds with a bit more soil and watered.

The wheat seeds sprout quickly, within a few days. And in no time your wheat needs a haircut!

And then the Vikings invade. At least they always seem to in our house.

We don’t mind, though. We like Vikings. And despite what you might think, they sing Christ is Risen just about as loud as the Greeks! Amazing.

Hoping you play with your food, too…

Some links on growing wheatgrass:

sugar does more than sweeten, my friends!

Two loaves of French bread, made with our own sea salt

Gave to: Mr and Mrs B, and Mrs B’s parents who are visiting from Far Off Canada

When I put together this post a few weeks ago I started thinking further about the four ingredients needed to make a basic loaf of bread. And since I was headed to the beach the following day, I decided to try my hand at making sea salt from scratch. I’ve always been a bit of a “survivalist” (…wondering if that’s really a term). I like to think about what I would do if I lived centuries ago, or if we didn’t have all the resources available to us–resources like grocery stores and electric ovens and super speed computers. Anyway, making salt the old fashioned way seemed like a great way to find out about a very basic resource, and understand better one of the key ingredients in my bread baking.

I live only a little over a mile from the Pacific ocean. It didn’t take much research to convince me that salt making can be done with almost no equipment; all I really needed was a willing soul to wade out past the tide line and fill up some empty jugs with sea water, and a few sunny days for evaporation. In walked my energetic daughter. Perfect!

Making sea salt was easy and fascinating. While the evaporation process was taking place, I read a book titled Salt: A World History by Mark Kurlansky. I took some time, too, to browse the web and see what other amateur salt makers had to say. Here’s some of what I learned about this important ingredient in our diet:

Even though it looks sunny and warm, Mad is wading out in ocean water that is about 61 degrees cold. Eek! Before I sent her out, I checked the water quality at this beach–Butterfly Beach in Santa Barbara–and it had just received an A+ rating…

My brave and adventurous daughter

We evaporated some salt water in the sun after quickly boiling the water over the stove, wondering if the grade A rating could be trusted. We also evaporated another batch that came straight from the ocean. Here is the salt that was boiled, forming crystals in the bottom of the pan after about five days in the sun. 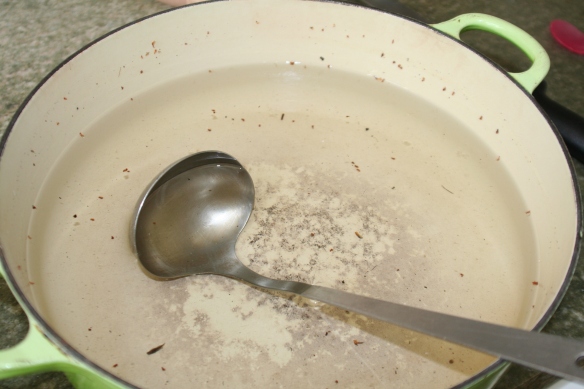 I learned after a wild wind storm that you need to cover the sea water so that dust and tree debris is minimized. We eventually came up with a method where we would cover our glass pans with a clear thin acrylic cutting board, leaving a corner of the pan uncovered so there was adequate air flow. 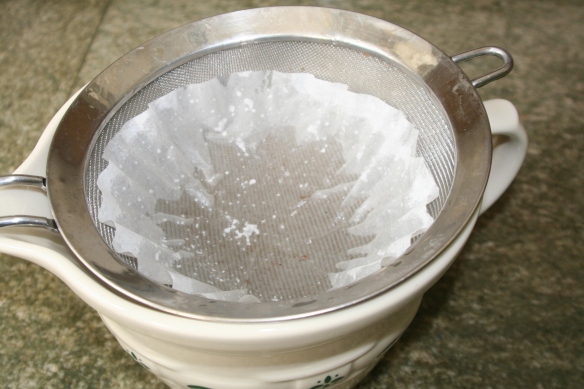 Here is another batch of sea water that is just beginning to show signs of something salty. Because I only evaporated a little under two gallons of water, it took just a few sunny days to complete the process in these shallow pans. 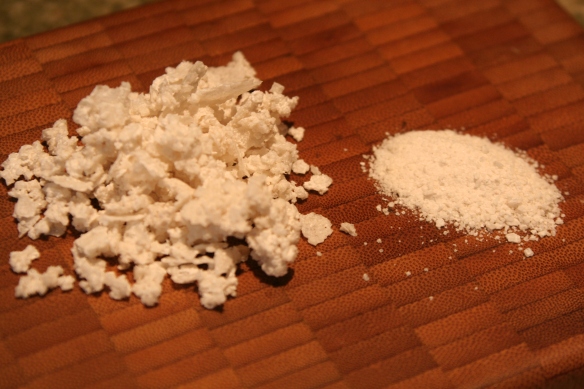 This is a picture of the salt that I thought was too moist, so I baked it. It was so hard that I ground some to a fine dust. I wouldn’t recommend doing this–I wouldn’t be surprised if I baked some of the trace minerals out in my hot oven…

Here is my Santa Barbara Sea Salt, looking so important in this beautiful olive wood salt box that my husband found

And here is a French Jaco, made with flour, water, yeast and homemade Santa Barbara sea salt!

So there’s my sea salt story. I enjoyed this process so much that I think I’ll keep it up during the warm months. I’d love to hear your salt facts and stories. Please share!

Disclosure of Material Connection: I have not received any compensation for writing this post. Not from my favorite chocolate shop, not from the RealSalt website, not from Bequet, who makes the most delicious caramels in all the world. But I suppose there might be some give and takes with Mr. B, whom is right now eating my bread, because he teaches my daughter math, and is just a handy friend to have around. I’m no good at math. If anyone owes anyone anything–then I really must pay some royalties or a bigger allowance to my daughter who dives readily into the sea to scoop up salt water for simple experiments. Okay, this has gone on long enough. Later, and back to the regularly scheduled show– I have no material connection to the brands, products, or services that I have mentioned. I am disclosing this in accordance with the Federal Trade Commission’s 16 CFR, Part 255: “Guides Concerning the Use of Endorsements and Testimonials in Advertising.”

You know what, though? I’m thinking that maybe I should write a children’s book on salt. The bread and the wine are covered… If you have a starting point for me please send that along.

Gave one to Dr R, ate the other with our tomato soup

A picture speaks a thousand  ingredients…

Most commercial breads have a shelf life of ten days. When you bake bread at home, using flour, water, salt and yeast, your bread doesn’t need much of a shelf life at all. You can simply enjoy it when it’s warm, eat it as toast the next day, and make croutons or bread crumbs if any is left over. Since we bake very little for our own consumption–about one loaf every two to three days for five people, we rarely have stale bread on our hands. And I’ve certainly never had a leftover loaf of bread grow mold!

Even if you’re not interested in making your own bread, I’d encourage you to purchase breads not made with preservatives. The added ingredients on a package of bread are there to prevent the growth of mold, help the manufacturers create a more uniform and “cloned” product, and to add to the flavor… They are not mixed into the dough, with love, for the benefit of the consumer, but for the profitability of the producer…

Just so you know.