When my husband and I moved to Santa Barbara in 2000 to be close to relatives in Southern California we never expected to contend with annual fire danger. Earthquakes? Yes! I was raised in earthquake-ville and know the drills; we’ve got the emergency kit for when and if that day ever hits–but fires?

Kaflooey. We’ve been living through one threat after another these last several years. Right before I began this blog, in May 2009, we had the Jesusita Fire, which just about ignited our entire neighborhood. Many of our friends have lost their homes these last several years in the Tea Fire, the Zaca and Gap fires, and the Painted Cave Fire…

Last Tuesday, driving home along the foothills, I saw the familiar plume of smoke. This is after a similar blaze just the week before, which endangered another part of our foothills.  The closer I got, the more I knew that this was burning right above my son’s school in Montecito. Emails started pouring in from the emergency agencies, from the school, and helicopters began buzzing overhead, sirens sounded–forces were on the move.

Firefighters! I have come to love and respect these men and women and the work they do for us. Wouldn’t you?!!!

So… the fire bell rang, the men rushed to the foothills at noon and hiked three hours to get to the blaze. They fought that fire all afternoon, all evening, eventually hiking out in the dark, headlamps ablaze. They slept well that night, I think.

And that same night I mixed up some dough for a giant loaf of sourdough. It was an emotional and tiring day with the thought of more property at risk… But the making of the bread kept me busy and by lunch time I had a gorgeous loaf of sourdough ready for giving.

All this to say!

We made a visit to a fire station. Usually, I don’t take photos of folks I give bread to. But Greg, the firefighter on the right, was absolutely beaming with goodwill and gratitude, and stood there holding the bread for so long, and with such joy that I finally pulled out my phone and snapped a shot. He had just returned from many hours in the field and said he was heading straight to the dining hall to break open that bread.

And in my giving I had help. Can’t forget the better two parts of my sharing team…

With the ravages of Sandy still lingering, and two fires in two weeks battled here in my own hometown, I’d like to say thank you to all who are stepping forward to lend a hand, to write a check, to comfort someone in their loss. These efforts are Love.

Sending you all lots of that love, and good cheer! 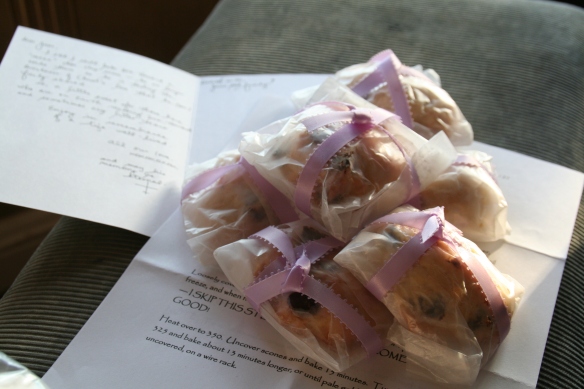 A box landed on my front porch. Inside was a recipe, a card, and two bags of chocolate chip scones. It was from a reader here, whose heart was touched by the suffering and struggle of Deacon Howard, our dear godfather and friend who recently passed away.

And the scones just happened to arrive on a Saturday morning. Off to vespers they went with me that evening, and as everything seems to have its own particular path, even scones, they landed in the hands of our priest’s wife, who just happened to be having Deacon Howard’s widow over for dinner.

From the hands of a warm and loving friend in Pennsylvania to a grieving community in Santa Barbara–that’s three thousand miles for love to travel, and love doesn’t seem to mind the journey or the miles.

On a recent trip to San Francisco, my kids and I stumbled across Arizmendi Bakery. The sign immediately caught my eye because the name and the type looked so BASQUE. Not very many Basques around, but I’m one of ’em (well, only a quarter, but that’s plenty!). We popped our heads in the door, inhaled the wonderful aroma of fresh breads and pastries, and even with my camera on the fritz I managed to trick it into taking a single photo of a large banner hanging from the ceiling: 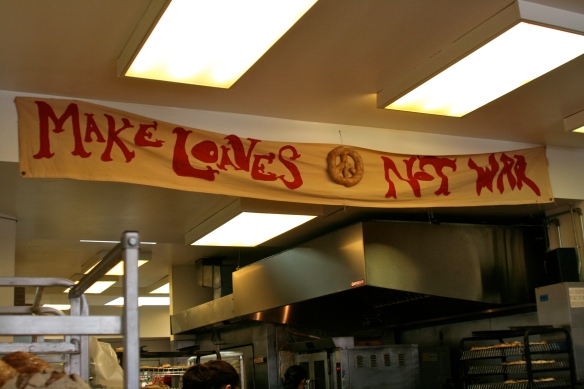 We also ordered a giant cinnamon roll to share. yum.

You know what? It’s not every day that I choose peace over war. I should, I’m trying. It’s a much better occupation to bake a loaf of bread and share it with my family or neighbor than argue with my kids or the guy who cut me off any day.

The kids woke up to cards, and went to school armed with goodies to share.

Last year I made a loaf of bread in the shape of a heart for my goddaughter. It was ridiculous, but fun. This year, I mixed up some dough and experimented with the shaping and scoring. 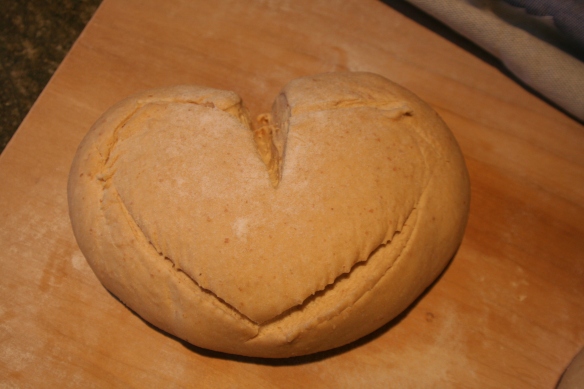 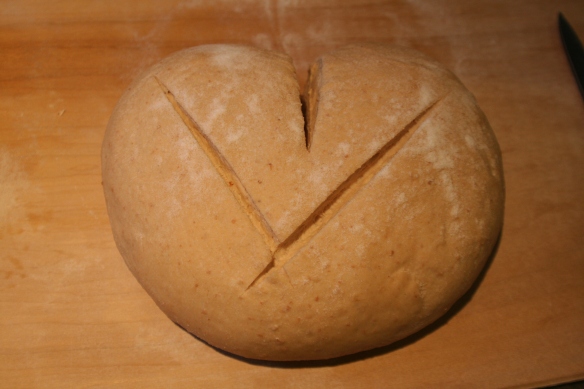 As soon as I had scored the loaves, I knew last years’ idea fitted the theme a wee bit better.

We couldn’t quite figure out what this loaf looked like…

But this one certainly had a wide and somewhat evil grin! My, my. Not really the look I was going for.

So, I doubled up my baking efforts and churned out some chocolate shortbread cookies. One of my favorite recipes, (and destined for the recipe tab at some point,) I knew these would make every Valentine celebrator love me just a little bit more!

And then came the giving. John Ronan is obsessed with the fact that the dentist told him that gummy bears are much better for your teeth than lollipops. (He was a lollipop aficionado, and that landed him in cavity land.) So we loaded up on gummy bears and hit the neighborhood! 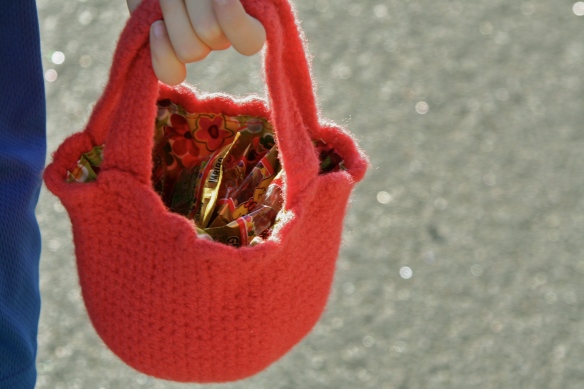 Isn’t that the cutest little bag? John Ronan “borrowed” it, since it’s destined for a niece’s birthday. (Ssshhh, don’t tell!)

Almost no one was home. But did that deter us Working-on-Being-Better-Giver Givers?! 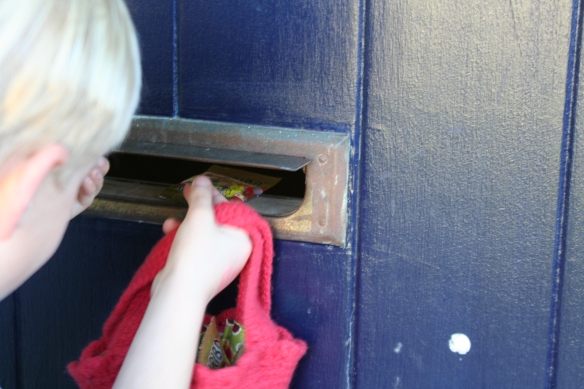 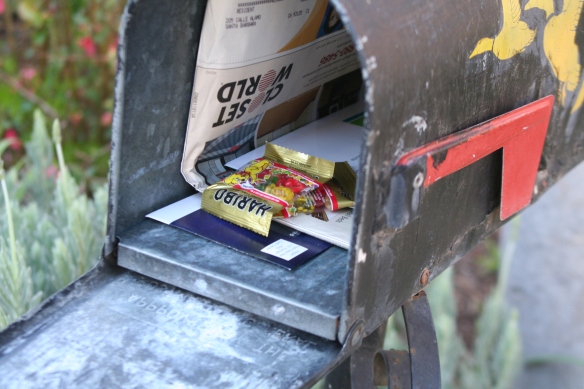 We dropped packets in the oddest places and thought it was fun that most of our neighbors wouldn’t even know where the treats had come from. (I really wanted to write from whence the treats had come--isn’t that fun? but a little too Downton Abbeyish for this blog…)

Almost lastly, we took one of the odd-shaped loaves of bread–plus more packets of gummy bears– to the swim instructors to eat in between lessons. (John Ronan is finally water safe!!!!!!!!!!!!!!)

And lastly, my parents showed up on the front doorstep with a BOX full of bread from my awesome baker brothers (and chocolate, of course).

Soup on the stove, and five loaves of bread in the kitchen, we held my parents prisoners for the evening to help us eat all the goodies,

Hope you had a lovely Valentine’s Day, my friends!

Giving. This blog is a lot about baking, but the premise of my baking is that I can learn to be a better giver. So that my heart can be turned more easily to those around me–so that I can root out the selfishness that often tries to take hold in my head and my hands and heart.

I have a lot to learn about love and beauty and having an open spirit. I’ve noticed how snarky I can be with my big kids. I see how impatient I can be with my little one–when I have a task in front of me, or when time seems short. Anyway, I’m working hard this season to give gifts that have nothing to do with what you might be able to purchase at the store.

Here is a quote that a friend sent recently. It spoke to me:

I have had tons of fun purchasing books (love books!!!), and chocolates, and things to stuff in stockings these last few days. I’ve enjoyed wrapping gifts, and making batches of pear applesauce to give away. Baking Struan has been a delight. But being the catalyst of love in someone’s life, by listening to their troubles, or by simply offering a hug or a hand or a bit of help, is the kind of gift that I want to give. A catalyst of love. 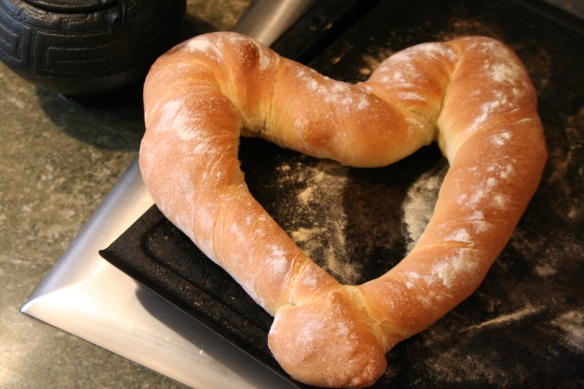 This (somewhat lopsided) heart-shaped bread was made specifically for my sweet goddaughter, Maria Rachel. Not quite two, she’s a bread eater (!!!) and already very loved (!!!). But I figured, why not a little more love–a little more bread on this busy February 14th day?

We filled our day with scooter rides, wearing pink, giving out Valentines, admiring the newly blooming plants, and lots of tackles and kisses and laughter. (Plus my husband and I zipped away for dinner out!) 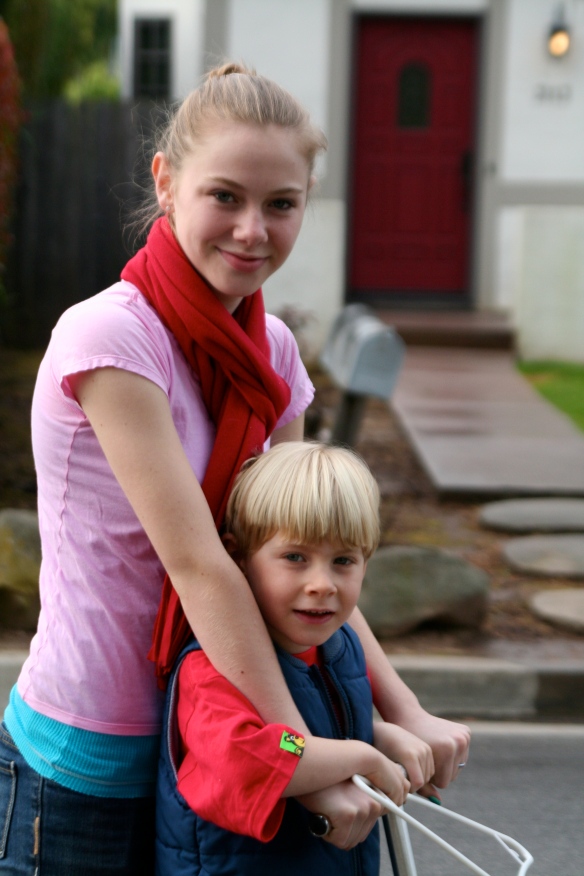 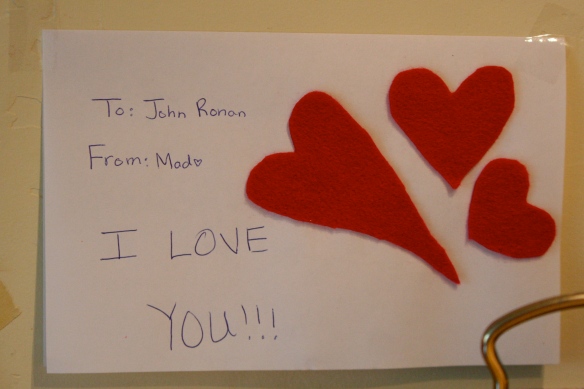 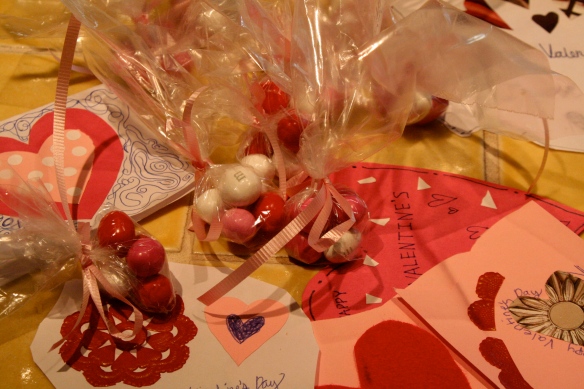 Hope your day was also filled with hearts, and love… 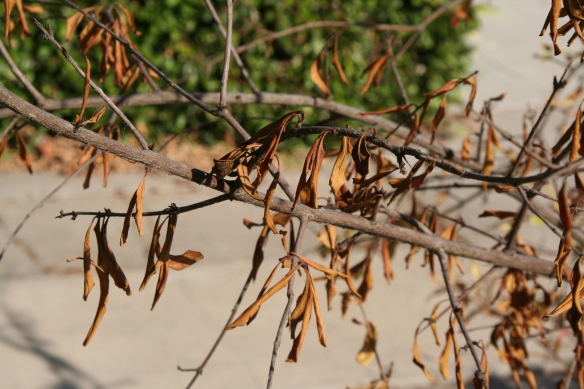 Many months ago I mused about my love for pomegranates. I wrote: “…And if you know me, I’ve tumbled across many a punica granatum. I hunt them out. I track them down. And I sit, and admire the red fruit from the car; it’s the thing that most tempts me toward thievery.”

So, wouldn’t you  know, that very thing–thievery–has come to strike my own tree, my own yard… Thieves have been about, and I’m not happy. Though I have thought about taking someone else’s fruit–yes, thought… I have never actually reached out and plucked.

But the story gets more sad and dreadful. Our beloved pomegranate tree is dying a slow but, it seems, inevitable death…

My husband and I have been using all our horticultural intellect to try to figure out the cause of this sad happening… The pomegranate tree (my favorite of all childhood fruits) a tree that was a birthday present many years ago from my parents–is just about at the branch-brittle stage. All summer we’ve watched our tree turn from green and lush 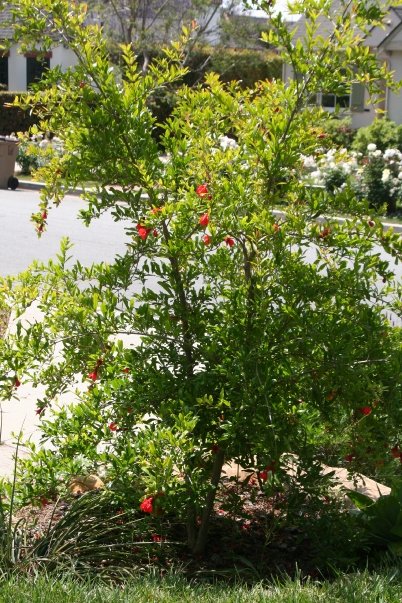 to weak and woeful…

Throughout this slow process of dying, the tree somehow managed to keep on its limbs about six pomegranates. We’ve picked one off a branch that was obviously dead, and were just about to pick two very round and gorgeous fruit that had fully ripened, but…

We returned from a long afternoon away, and the fruit was gone.

What sadness! Not only for the loss of the fruit, maybe the last fruit we would pick from that beloved tree, but sadness for the person who reached high into the branches, snitched the fruit, and tiptoed away.

What I’d really like to do is bake a nice loaf of sourdough for this person… They must need a friendly neighbor, a little dose of love, and I’d like to be someone who reaches out… Last Sunday in church, our pastor exhorted us to keep a peaceful heart–to hold captive any thoughts that enter your mind that might disturb the peace we so desperately need. “Hold those thoughts captive, and reject them!” I don’t want to think unhappy thoughts about you, my thief… So, if you swiped my pomegranates, and are reading this, leave a note on my porch, designate a time and place for the bread drop off, and I’ll bake for you.

Rosemary rolls to Sydney and friend

Giving bread is one thing. And making it is satisfying. But giving both love and bread? Now, that’s worth doing… I’m working on it.

I believe there’s much truth in this simple statement:

You can give without loving, but you can never love without giving.
Robert Louis Stevenson

There are people all around me who give lovingly, unselfishly. The Shannons happily offer us their pool, so John Ronan can learn to swim. My parents drive two hours, just to wish one of us a happy birthday. Joanne leaves pomegranates on the front porch, because she knows I can never have too many!

Who can be unloved with friends like these? Do you have friends who show their love to you by giving? I bet you do.

And let’s turn that love around, TODAY even, or this weekend!!! and give some in return…