Someday I won’t be in charge of so many people and where they need to be, and what they want to eat, and whether or not they’ve cleaned up their rooms. Some day. But that day is not now.

If you don’t know yet–I’ll let you in on a big secret. I’m a horrible cook. Chopping, searing, braising, creating with beets and goat cheese? Eek.

My husband, on the other hand, learned to cook early on in our marriage when I was going to school full time (landscape architecture) and working full time (waitress, gymnastics coach, draftsperson.) I was busy, and he likes to eat tasty vittles.

Fast forward many years and Douglas is the Mediterranean Master. He can whip up anything from Moroccan to a first class risotto. My mom even gave him a full chef’s uniform for his birthday a few years ago. Super fun.

I bake. And I nag my kids about their rooms, and I tend to burn things when I’m off helping with homework and telling kids to STOP playing those video games.

(Sorry.) This is a Long Story!

When I bake I have to keep track of the process or else I lose track of the process. I’m a list maker; if I can just get something written on paper, all anxiety seems to ease. So these little scraps of paper follow me from mixing, to molding, to baking. And sometimes they get a comment or two added to them; it’s satisfying to write your baking emotions in black and white. 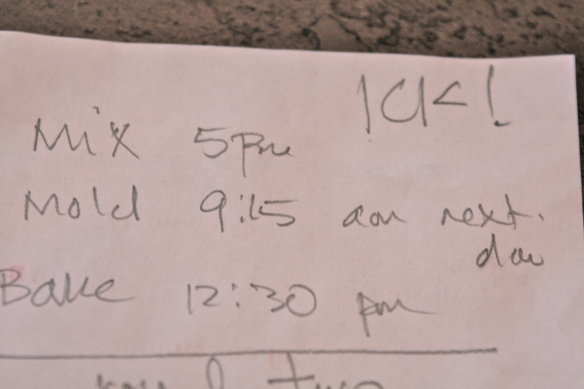 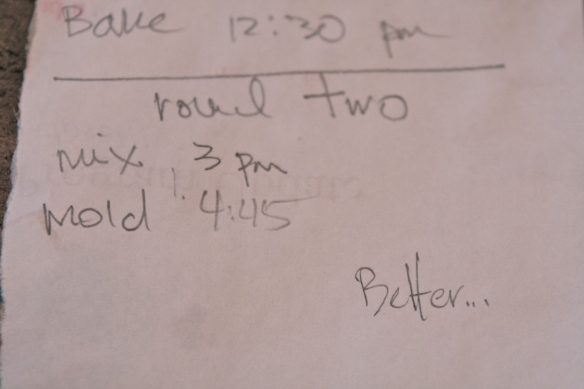 Do you use lists to help you stay sane? Or maybe I’m insane–look at all of these lists that are around our home… 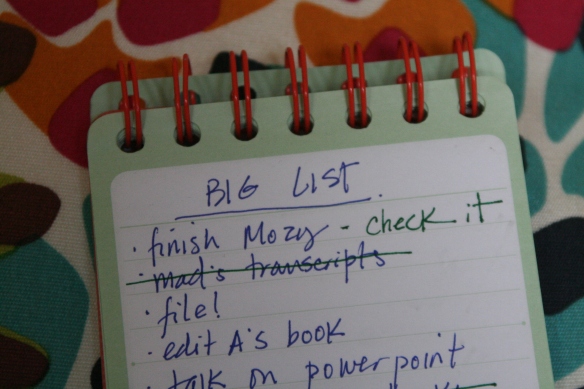 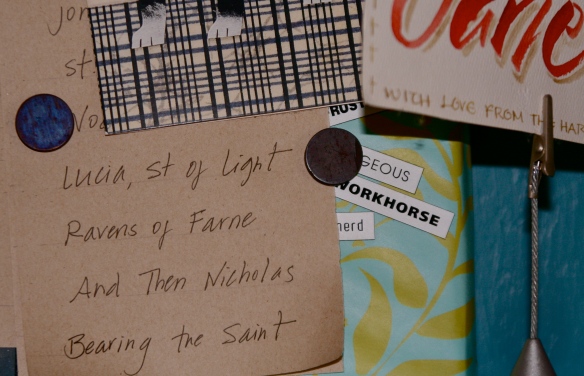 Knowing that most of my friends are easily as busy as I am, I hope this idea helps. Or maybe it just helps confirm to you that I am slightly crazed and desperate not to let the industry of paper and ink entirely disappear…

I’m thrilled for this new beginning. We’ve been celebrating these 12 Days of Christmas with lots of dinners with friends, a short holiday away, and time to reflect and simply be quiet. What we didn’t do to usher in the New Year–was throw bread or cake at the front door like we did last year. Last January 1st, we were visiting family in Arizona, and true to the Meyer clan, there was a lot of craziness spinning in all directions. This year, since we were home and in a very relaxed spirit, (and because we didn’t have any bread or cake in the house to throw! ) we sat around on New Year’s Eve and looked and laughed at photos, remembering all the adventures that came our way in 2010. I feel renewed and appreciate the peaceful spirit in which this new year has begun.

Though I haven’t blogged about my baking these last several days, I’ve been busy as ever, mixing up new recipes and finding people to share with. Once I hone the Downeast Maine pumpkin bread recipe, I’ll share that with you, but I won’t be advertising any of the Christmas fruit cakes… Eek. I’m just not a fan of candied fruit or plumped raisins. Are you?

One highlight was a recent afternoon when I had to deliver some paperwork, so I toted along an extra loaf of pumpkin bread as well. I’d intended the bread for a sweet friend, but she had already left for the day–so I happened upon a man–Jorge–and gave it to him. He speaks halting English and lives in some office-like buildings behind a church with his family. His smile and thanks were so genuine that I am still feeling convicted by how very much I take for granted.

And last night I let John Ronan once again choose where to take our extra loaf of French bread. His enthusiasm for running around the neighborhood, knocking on people’s doors is contagious. I’m blessed beyond measure to have his zips and zaps of energy buzzing around me. Giving is so much easier when a child’s open and generous heart is leading the way.

Wishing you a blessed New Year, filled with peace.

Happy giving, everyone! And I’d love to hear about your hopes for this new year (more lists–love lists!), or stories about giving that have affected you this season…

Molded: 7 am next morn

Donated both loaves to the market

I’ve been tumbling from one event to the next this last week. I organized a dinner for 60, finished up the last giveaway of my books, ran a three-day sale, kept up with homeschooling my daughter, plus wanted to have some close friends over so actually endeavored to scrub the house. It’s that time of year…

So, when my husband gave me a hard stare and asked whether I really wanted to mix up a batch of dough for the farmer’s market at our church, I stopped and tried to weigh his words carefully. Sometimes we give too much–we stretch too far, and we end up sacrificing beauty for hurry. I don’t like to hurry–there’s very little peace found in hurry.

In the end I decided to spend the energy and make the bread. Thankfully it’s a recipe that only takes a few minutes to mix, and very little effort to bake. And the two loaves were purchased and carted off even before I got the camera out of the bag. I’m glad I baked, and the added money will help folks in need this winter season. But I’m heeding my husband’s words still, and trying to not end up on that hampster wheel of spinning in circles, unable to see beyond the cage.

Being Orthodox, this season of Advent is a time of prayer, fasting and introspection. Bread baking fits so beautifully into this scheme, and with the cold weather here, I plan on mixing batches and batches of dough as these forty days pass. Here are a few other things I’m doing, then, I’d love to hear from you.

Now, what about you?

I’m heading to France in just three days. I’m launching a reading program, hosting a birthday party tomorrow, my husband is out of town and my daughter is in the middle of a run of nine-straight days of opera rehearsal. Tomorrow’s the first performance. I need to write a newsletter, curl my daughter’s hair into ringlets, (every day–and it takes forever!) and put together the party bags. Oh, and clean! I don’t do well when I’m terribly busy. I shut down.

So, yesterday at 4pm I did just that. I had so many things on my list that I became crippled and sat on the kitchen floor, barefoot and in jeans and a cozy sweater, and cleaned the fronts of all my cabinets. I just sat there, for hours, spraying and wiping and monitoring each square inch of painted white. Finally, at 7pm, with the youngest already sleeping, I went to bed, too. I just lay there, a still-dressed lump, until I peeled my body out of bed at 9:30pm to collect my daughter from rehearsal.

Today the race began yet again, but with even less time and more to do. I knew I needed a strategy or I’d end up cleaning some other unimportant furniture item. Knowing my tendency to shut down when overwhelmed I decided all day long that I’d drive in the slow lane and only try to do one thing at a time. No multi-tasking. No eating while typing, or calling while driving, or gardening while hot-air ballooning. Better to leave something undone, than do everything poorly–or have to do it twice–don’t you hate that?!

So, with this strategy of Slow I’ve been able to make some strides forward. I even had a chance to bake a double batch of scones today, taking half to my son’s school for a performance tonight, giving the other half to folks holding signs downtown. We delivered them to several young gypsies who probably haven’t had warm scones in a while. Who definitely don’t look like they’re bothered by lists and getting things done. Maybe they’ve hit the wall, too, like I did yesterday.  Maybe they just feel like cleaning cabinet fronts. I don’t know.

Funny, that. I guess I was too busy to ask.

So, I got a bit of a late start baking today. A not-so-typical Monday. My husband has just returned from India, so he was taking time in the middle of the day to do things that he’d missed while away. I was continually examining my list that had grown over the weekend to 19 items long. With my husband away I had lost some ground, and it being Monday, me being somewhat rested, I thought that 19 items, with a miracle here or there, might be possible. Ha! I’m such an optimist.

My husband’s a pretty handy fella, but electrical work isn’t high on his handyman resume. While I was doing some Monday morning tidying, I heard him on the phone with his dad, trying to figure out how to install an outdoor light fixture with a motion censor. It was a replacement for the old one that had been crushed to bits by a wayward basketball. The installation wasn’t going well, and the only reason I was tidying at all was because the power to my computer was repeatedly being turned off. Finally, after many failed attempts at getting it right, I suggested he visit Jack, our electrician neighbor across the street, who happened to be home.

I’d wanted to bake sourdough to go with our evening meal of grilled veggies and chicken. Plus, I just like fiddling with sourdough. But where had the time gone? Being optimistic didn’t help; sourdough doesn’t respond to hope and optimism. It responds to warm kitchens and patience. So, I settled for a bread mutt: I mixed my typical recipe for French bread–unbleached flour, salt, and water, then used half the typical amount of commercial yeast and flopped in a full dose of sourdough starter.

Meanwhile, my handy husband was learning from our neighbor, Jack, that his wiring efforts were flawed. That he had connected the white and the red in exactly the wrong places and might have burned the house down. Oops.

So, now it’s 5pm, the bread is beautiful–it’s hot, but who to give the second loaf to? After all, that’s the whole point of this blog–to get me out of my cozy hole and get me giving. I glanced at my 19-item list to see if I needed to give anything to anyone… Nope, no help there. I opened the front door and peered up and down the street for haggard and hungry wanderers.  I thought about walking the loaf down to the neighborhood park, but it was awfully dark outside. Finally, I asked my husband, “who do you suggest?” 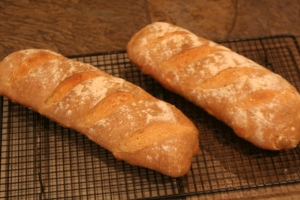 Of course, Jack. It must have been that list. I was side-lined by a list, not able to see past the list. Past the list to Jack, who deserved more than a loaf of bread as thanks for keeping us electrically safe. A sourdough mutt for Jack. I ran it across the street, propping it on a chair so he’d see it when he returned from wherever he’d zoomed off to. I hope he liked it. I checked a half hour later, and it was gone, found, hopefully eaten. Thank you, Jack…